Get off the beaten track, finally! 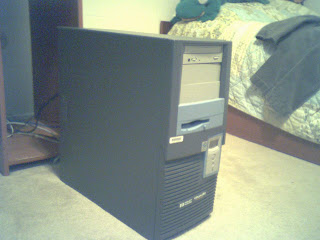 I was charged with a task of setting up a PointGuard demo.

Now, PointGuard "friendly infects" the computers on internal network and then controls them, enforcing policy rules and compliance. It has to run on a server such as Windows 2003 and it needs a good number of machines to control. How does one do this?

Obvious solution of actually having all these machines is DOA, dead on arrival.

I thought of running it on my "monster server" which has 2 Gigs of RAM. I would put the Windows 2003 on top of VMWare, and run a few VMWare Windows XP, and one machine makes a complete demo.

I have spent a couple evenings just installing Windows 2003 (the server is somewhat old and boots slow, but then "flies"). Until the idea hit me! How could I have gone on this track! All my other projects are on EC2/S3, and this one is on my own hardware! Unbelievable.

So here is the right architecture.
So what is "monster" about my server? That it is monstrously old, born 2001, and I almost went the way of the dinosaurs, but recovered my wits at the last moment. Sigh of relief.
Posted by Mark Kerzner at 6:46 AM